Products imported through the official importer come with Australian power supplies that conform to the Australian electrical standards.

What is hay fever?

Hay fever is the common name for the medical term allergic rhinitis. It is the most common allergic disorder in Australia and NZ, affecting an estimated 1 in 5 Australians.

The name came about because symptoms occurred during hay harvesting season when pollens were in the air. It happens when you breathe in something that you are allergic to, these are known as allergens and they cause the mucous membranes linings of your nose to become inflamed and swollen. These allergens are found in grasses, pollens, dust mites, animal hair, animal dander (skin) and mould, to name some common ones.

Nearly everyone with allergic rhinitis complains of an itchy, stuffy or running nose. Sneezing is common, a post nasal drip can trigger coughing and you may experience an itchy or sore throat or burning, watery eyes. Symptoms range from mild to severe, the latter reducing quality of life with absences from work or school.

When does it happen?

How to reduce/ treat symptoms

If you have allergic rhinitis, the best thing to do is to lessen your exposure to the allergens that cause your symptoms as much as you possibly can. The duration and severity of allergic rhinitis symptoms are useful in guiding therapy. Treatments can include pharmaceuticals such as antihistamine tablets/nasal sprays/eye drops; nasal steroid sprays; decongestant sprays/tablets. In severe cases immunotherapy or “allergy shots” can be used by a medical professional once allergens have been identified by skin tests. Natural therapies include rinsing your nasal passages with sterile saline solution and steam.

Steam is a natural age-old remedy used to flush away allergens and irritants, such as pollens and grasses, from your nasal passages. Steam also thins mucous so that it drains out easily from your nasal passages and sinus. Nasal congestion is cleared enabling you to breathe freely. The therapeutic benefits of steam are recommended by doctors and leading medical sites. Being all natural, there are no unpleasant side effects from drugs.

As someone that suffers from hay fever and mild asthma I have a cupboard full of medications. mypurmist has given me relief that has allowed me to cutback completely on the sprays and pills feeling relieved and comfortable. Cant recommend the natural remedy enough!

Handheld, use anywhere, anytime. Instant ON, and no maintenance

Hay fever symptoms are annoying and can impact ones' enjoyment of life. Steam inhalation can help ease the symptoms but can be awkward to do. mypurmist makes it easier to get natural relief by relieving nasal congestion and flushing away the allergens.

mypurmist uses advanced innovative technology to deliver steam directly into your nasal passage to flush away the allergens. Using double distilled pure water through a patented capillary force action, it produces instant fine steam that can be temperature controlled to your liking.

mypurmist was developed in the USA to treat not only the symptoms of allergic rhinitis (hay fever) but also sinus conditions, cold and flu. It provides instant superb natural relief and can be used by anyone in the house over 12 years old. A survey of mypurmist users in the USA found 92% had improvement in their symptoms. 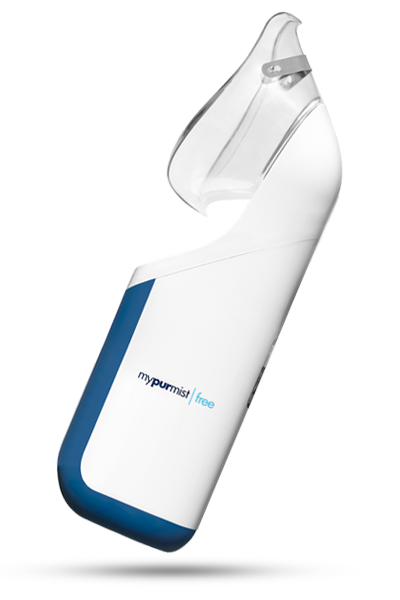 Over 500,000 mypurmist's have been sold in the USA. It is now exclusively available in Australia. As we so strongly believe in the mypurmist, we offer a 21 day money back guarantee*.

mypurmist can provide symptomatic relief for:

Steam has been used for decades to provide therapeutic benefits to the upper respiratory system. Steam inhalation is a natural and effective treatment for respiratory conditions and is highly recommended for treatment of the common cold, sinusitis, allergies and laryngitis.

Inhaling steam also helps to relax muscles, thereby relieving coughing. mypurmist is the world's most advanced steam inhaler making steam delivery effective, safe, and easy. mypurmist has harnessed and maximized the therapeutic power of steam in a simple handheld device that is easy to use.

mypurmist provides symptomatic relief of allergies by washing away irritants and allergens with regular use. For specific allergies, please consult a healthcare professional

Humidifiers will create humidity in the entire room. Normal recommendation is to keep the room approximately 40% humid. High humidity causes mould in the room that can make your symptoms even worse. However, mypurmist is directed humidity, so it will only provide humidity where you need it and will not humidify the room. This can in turn help the inflammation and congestion that you may have because of mould allergies.

mypurmist reinvents steam therapy utilizing breakthrough patented Capillary Force Vaporizer (CFV) hospital technology*. mypurmist provides instant, targeted, and directed 100% humidity right where and when you need it and nowhere else, providing superb relief from inflammation and congestion caused by allergies, sinus infections, the common cold, and flu. Steam is a doctor recommended natural decongestant used by millions and mypurmist is the world's most advanced steam inhaler making steam delivery effective, safe, and easy. mypurmist is 100% natural drug-free solution to all your sinus and upper respiratory symptoms. mypurmist sets a new standard for effectiveness, safety, purity, convenience, and ease of use. mypurmist provides instant fine mist that penetrates deep into your sinuses, nose, and throat effectively washing away irritants and allergens.

mypurmist can provide symptomatic relief for any of the above symptoms. However, for any other symptoms you can use mypurmist if you believe humidification would be useful for alleviating those symptoms. mypurmist provides the most efficient form of humidification and is very easy to use. So, if you are looking for humidification, mypurmist is very likely to be an exceptional option.

Free shipping on any orders over $99
(Applies to Australia only)
Due to COVID-19 frieght deliveries maybe delayed.